We’d like to introduce a new team member who will be responsible for communication between the
community and the Screeps Team as a Community Manager & Advocate: 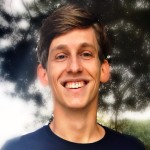 Hey everyone, let me introduce myself. My name is Mark Bertels but most of you probably know me as Dissi. I’m 27 years old and I live in The Netherlands. I have been programming for more than 12 years now. I’ve made my hobby into my profession.

I’ve been an active Screeps player for nearly 2 years now and saw that the Screeps team needed a community manager. As I really love the game and community as a whole I did what any member in the community would do; I applied for the position. Today I can tell you that I will be helping the team as a community manager! I will be helping them out in consolidating different opinions in the community on changes. I will also be tracking down bugs and helping with the requests.

As a community manager I also will be voicing your worries and ideas back to the development team.

I’m practically always online on the slack channel, you can ping me there with @dissi if you require my attention or just want to chat a bit!

Going to another technical interview and want to show your Screeps skills as a proof? Fleetster startup uses Screeps as a key part of their recruitment process. Anna Baumeister explains how Screeps is useful for their business:

We started using Screeps as a means of technical evaluation end of last year. Since then, our business has been thriving and our use of Screeps as a test has become more visible.

In order to understand why we chose your game as a key part of our recruitment process, it’s important to understand a little bit about fleetster. We are a small startup in Munich, Germany, working with the latest JS tech - Node, Ember, React, React-native, TypeScript etc. Our business is lean and our process is agile which means specifications are changing all the time.

Screeps is useful because it throws candidates into an unknown environment where the number of “right” solutions are very numerous. They have to get their bearings and make a pl an of action whilst dealing with unexpected outside interference (other players). We hope you won’t mind our presence in the main game world, but we find the huge scope of the main world helps to further intimidate candidates. We need people who can take on complex challenges head on and realize that most often the solutions are simple and accessible.

This is a remote paid part-time job position on the hourly basis (using time tracking software).

We want you to join us if:

If this describes you, please email your resume to job@screeps.com. Don’t forget to specify your Screeps nickname and experience, and your desired hourly rate.

Quality documentation and API reference are crucial for the success of any program platform, and Screeps can well be considered a program platform. That's why we spent so much time to thoroughly document all available game objects and methods which was not very convenient on top of Zendesk Help Center. Now we are excited to announce the launch of our new documentation site that you can start using right now!

Here is the link: docs.screeps.com

Besides revamped looks and improved desktop and mobile navigation, the new site boasts another feature: it is fully open-source and GitHub-based. This means you can always offer a fix or suggestion.

And that's not all! We understand that Screeps is a game with a steep learning curve, and good documentation helps make it flatter. If you want to help us document the game well, we are ready to thank you in return.

Contribute to documentation and earn money

We announce the launch of the Contributed Articles program! If you write a fully compliant article that will be included in the official documentation, you will get $50 on your PayPal account or 5 Subscription Tokens (roughly equivalent to $ 90) on your game account depending on your choice.

Please read more about the program using this link.

The Screeps team is looking for a talented JavaScript developer to work on the game code base. We have a huge number of development plans, and if you want to be a part of their implementation, we’re waiting for your resume by one of the following links:

If you play Screeps, make sure to specify your in-game nickname!

You can find the requirements in the job posting below.

Power creeps is perhaps the most significant revamp of the Screeps gameplay since its launch. When in December 2015 we introduced the new game resource called “power” and announced the future system of its usage, we knew how drastically power creeps and powers would affect the game balance. This is why we didn’t rush to implement them, but we wanted to thoroughly understand and evaluate the whole picture. (Numerous other routine issues and the major business goal of the project – launch on Steam – didn’t speed up things as well.)

Now we are ready to present to you the game design document on how the power creeps system will look like. We are yet to polish and implement it in the game, so the estimate PTR launch schedule is March or April. For now, we want to discuss it with you and hear your comments. How do you think this important update will affect the game?

Feel free to post your comments and suggestions below or in this forum created especially for power creeps discussion.

We have enabled Steam Workshop integration in the 2.1.0 server build. Now you can submit your mods and bot AI scripts to the Workshop, and manage them using the Steam client server launcher: 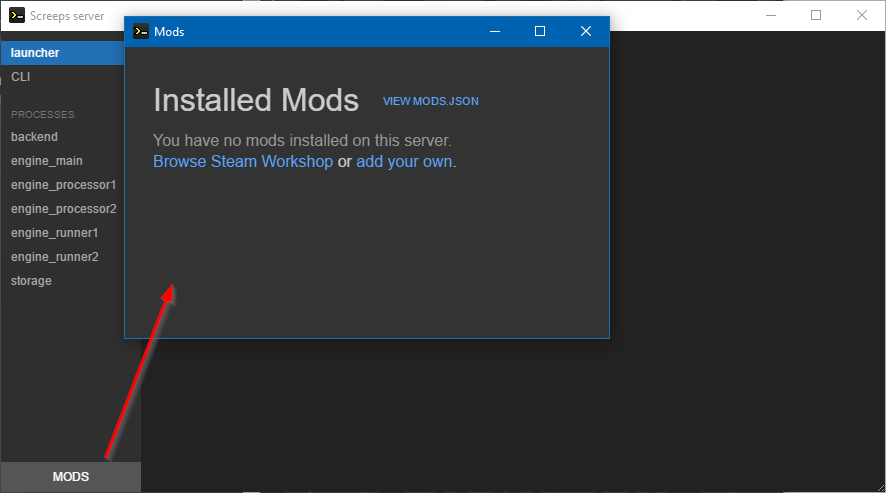 Steam Workshop is linked to the npm repository. It means that you need to publish your package to npm first, and submit it to the Steam Workshop after: 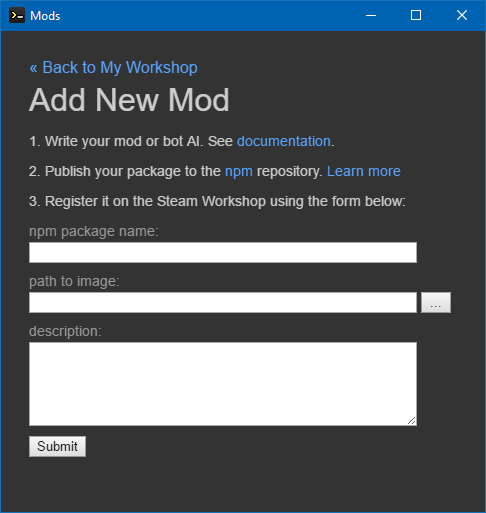 This way we can have the best of both worlds: all mods are still available via npm, and you can browse them using the convenient and friendly Workshop UI. All mods will be automatically updated to the latest version on server launch.

Now, it is time to write some mods!

We are glad to announce that after two weeks of closed testing, the Screeps standalone server is live for public testing, and the entire code is posted to our GitHub and available to all!

Now you can install the server on any machine from the NPM repository with a couple of commands. Please see instructions in our README.

Within a couple of days, we plan to set up integration with the Steam Workshop to let you upload your mods for the community.

Besides, after negotiating all the details with the Steam marketing team, we have agreed on the date of making Screeps available on Steam as "Full Release." If everything goes as intended, the release will happen in a week, on November 16! The game will exit the Early Access status and be published in the main catalog of Steam games.

We have enabled Subscription Tokens integration with the Steam Community Market. Now you can not only buy tokens using Steam Wallet, but also sell them there. If you own Screeps in your Steam account, having tokens in your profile will allow you to exchange and trade them on Steam in the same way as with any other items on it.

September has begun, and we start getting natural questions like: “When will the open-source server go live that was promised in August?” So in this post we’d like to explain the situation that’s going on now.

Currently we have actually three parallel development pipelines for Screeps:

When our second Indiegogo campaign was launched, the plan was roughly this: make a market system as a major feature, and then delve completely into the development of the standalone server and a Steam client for it. That’s why we set August as an approximate milestone date. However, after the campaign’s end and some consideration we realized that the Steam launch proper and the standalone server release are two vastly different things that should be better done one at a time rather than simultaneously. A higher traffic from Steam may require some adjustments in the scalability of the game servers, so we’d be having hard time watching this process and at the same time taking care of the open-source project that would appear along with it. We decided to first launch the Steam client to attract users to the main official world, debug it, and then move to the standalone server without any hassles.

Our experience has shown it was a right decision. When Steam gave us hundreds and hundreds of new players, it revealed a number of issues in our server architecture that prevented capacity scaling for running your scripts, and we put a lot of time and efforts to debug and optimize those bottlenecks. You might remember how the tick duration soared from 2.5 to 5 seconds, then fell back, then grew again, and then stabilized at 2.7-3 seconds. We are content with the current rate, but achieving it required a lot of work within the past two months.

Due to this reason, unfortunately, the standalone server won’t be launched within the coming weeks. We are sorry to realize that we missed some deadline, but please be assured this was not due to our laziness, but we decided to rearrange the work, and the history proved it was a right decision.

And there is another reason for delaying too. After the Indiegogo campaign was over, we spent some time on designing the concept of a standalone server, and we realized we couldn’t just take the current server code, open-source it, and rest on our laurels. For the project to gain traction as standalone as we see it, the following design concepts need to be implemented:

Implementing some of these things requires the overhauling of the current server code of Screeps since they were not accounted for 2 years ago when the game was first designed. But we are convinced that short of these, the standalone server won’t be the type of product we really want to share with you.

In terms of deadlines, we don't want to be overly optimistic at this point making promises we won’t be able to meet. Let’s keep October in mind. If we get a working version earlier, we’ll definitely show it. As was promised, our Indiegogo campaign backers will be the first to get their hands on it, while the public availability will begin a month later.