Power creeps is perhaps the most significant revamp of the Screeps gameplay since its launch. When in December 2015 we introduced the new game resource called “power” and announced the future system of its usage, we knew how drastically power creeps and powers would affect the game balance. This is why we didn’t rush to implement them, but we wanted to thoroughly understand and evaluate the whole picture. (Numerous other routine issues and the major business goal of the project – launch on Steam – didn’t speed up things as well.)

Now we are ready to present to you the game design document on how the power creeps system will look like. We are yet to polish and implement it in the game, so the estimate PTR launch schedule is March or April. For now, we want to discuss it with you and hear your comments. How do you think this important update will affect the game?

Feel free to post your comments and suggestions below or in this forum created especially for power creeps discussion.

Power creeps may be defined as “hero units” from other strategy games. Here are some key facts about them:

You level up your creeps manually via the GUI. Select a creep that you want to level up and agree to spend the specified amount of power resource. To calculate the needed amount of resource, the sum of all levels of your power creeps is used. The higher this sum, the more expensive it is to level up any of them, as well as to create a new 1-level power creep (equivalent to levelling up an existing creep).

Here is a preliminary table of resource usage across levels (may be changed later):

With each new level, you have to choose one of the three powers available on this level. The powers options available at any level of a creep development are fixed for each class. Your choice at each level is to choose one of the three suggested options. It can be a new power or levelling up an existing one. Each power has a level between 1 and 5, and the level determines its effectiveness.

Have a look at this example: 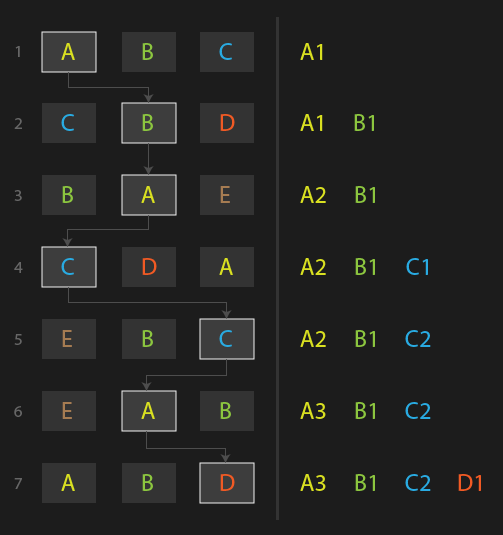 Here you can see the process of levelling up a 7-level creep where it is sequentially assigned powers A, B, A, C, C, A, D. As a result, this power creep will have the following powers:

Each power creep belongs to one of several available classes that you assign on its creation. Once assigned, a class cannot be changed later (unless you destroy a creep and create it from scratch). The class determines the set of powers available to the creep. There will be 3 classes in the game upon launch:

A creep working mainly in the rear, at your base, though it can be used as a saboteur in offensive operations. The list of powers:

This power creep is not very useful on its own, but it’s a team player. It influences and affects regular creeps, both friendly and hostile. The list of powers:

This creep class prefers working alone. Due to its skills, it’s a very effective performer in your economy or as a war machine when defending or attacking. The list of powers:

These classes with their powers is a preliminary picture of how we view the game balance at the moment. It’s open to change, so please leave your comments and suggestions below.

In general, we want to reach the point where power creeps become an independent scale of your game development in Screeps, parallel to the Global Control Level scale. As you can quantitatively increase your abilities with each new GCL (you can build more rooms, have more CPU, more creeps), in the same way the sum of your Power Levels will increase your abilities qualitatively by unlocking new powers and boosting their effectiveness, which leads to increased effectiveness of your economy and viability of your colony.

Using one high-level creep will allow you to achieve the same result as with 5 or 10 regular creeps and consume less CPU. You can scale your game influence the same way as through boosting your GCL, but the process will be deep rather than broad.

At the same time, the levelling system does not allow you to create a power creep exclusively for one specific skill and thus a very simple behavior logic. Any high-level creep will have several useful powers, so in any case boosting its effectiveness will require you to solve a difficult, but interesting task of developing its AI. Since any creep even in the same class can have an individual set of powers, its behavior logic can be unique and different not only from that of other players’ power creeps, but also your own other power creeps.

This significantly expands the scope of interesting challenges a player faces in Screeps, and we hope it will add fun and variety to the game process.